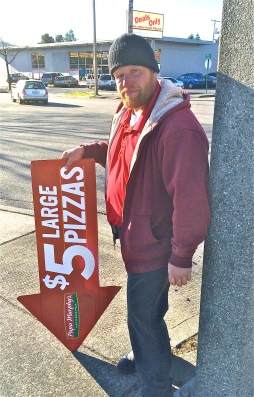 Just in time for the holidays, this happened.

A Papa Murphy’s pizza restaurant in Bellingham, WA partnered with a local job placement service to re-assign and elevate a popular disabled neighborhood panhandler, creating a win-win-win situation for the ages.

Joe Beadles made a decent supplemental living for years working the southeast corner of James and Alabama Streets in Bellingham’s up-and-coming Sunnyland neighborhood with a cardboard sign that read NO DRUGS. In October, thanks in part to the creativity of a forward-thinking caseworker, Joe was handed a W2 and issued a uniform and a foamcore arrow sign advertising Papa’s famous pizza dough (baked fresh daily). Joe’s territory hadn’t changed– but everything else had.

“Before Joe and I began applying to barker jobs, we looked for warehouse work for him,” said Isaac Folkerts, an Employment Specialist at Service Alternatives, a multi-faceted human services agency based in Whatcom County.  “I came across an ad for a different restaurant barker position. I talked to Joe about it and he agreed to apply. “

Joe did not get that job, but the next opportunity was even closer to home. Haven Cole, manager of the Papa’s store in Sunnyland Square hired Joe on the spot, after an hour-long interview.

“Joe had a lot of questions,” explained Haven smiling, suggesting Joe was as much interviewing her as the other way around. If Haven were trying to conceal 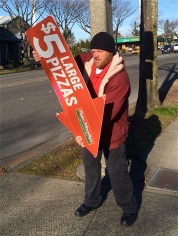 her pride in having Joe on her staff, she was doing a terrible job of it. With deep, expressive eyebrows and a medusa piercing above her top lip, Haven beams when talking about her star barker. “Joe’s got a big heart,” she said, shrugging. “Why wouldn’t you hire him?”

For his part, Joe is very committed to what he’s doing, putting that big heart on display every shift. Throwing himself into his work with seemingly little regard for his rotator cuffs, his curb crackles with energy. Crouching and leaping, Joe cycles through a routine of moves, but favors one he calls steering wheel— a vigorous side-to-side shimmy guaranteed to grab the attention of even the most distracted driver. Sometimes he dances. Often he waves. Occasionally he sings, changing the lyrics of folk songs to 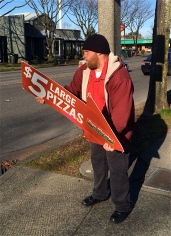 incorporate references to pizza, signs, and cars. But mostly, it’s steering wheel for up to four hours at a time.

“As long as it works,” he says, punctuating the statement with a finger in the air.

Originally from Arizona, Joe moved to Washington State ten years ago in search of better healthcare. He is very open in discussing the automobile accident and the resulting brain injury that has stunted his physical and non-physical development. Joe was two years old at the time of the accident. He’s now 35.

Relaxing in the subsidized apartment where he lives alone, Joe indeed has questions. He wonders why people would be interested in reading his story. 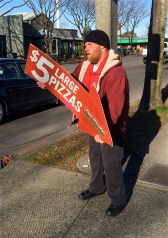 The drapes in the apartment are drawn against the late afternoon sun shining over the traffic on I-5 just outside the window. It is the Tuesday before Thanksgiving and the windchill outside makes it feel like it’s about zero. The heat in the apartment is turned up very high.

To go with his questions, though, Joe has plenty of answers– and he doesn’t mind being asked stuff. His responses generally start out low, then crescendo in the middle as his engagement in the topic builds, before tapering down and concluding where they started, almost in a whisper. His favorite pizza is the 5-meat, which he takes with Diet Pepsi. The s’more dessert pie is pretty good, too, for $5. Plus he gets half-off after his shift, so it’s only $2.50. Even I can easily divide $5 in-half, but Joe is very good with numbers, quickly recounting to-the-minute his last four Papa’s shifts before effortlessly calculating their corresponding gross pay. He also has a deep knowledge of the WTA bus system and can tell you most any stop on most any route.

Joe doesn’t drive. He “tricks” traffic by walking King Street under Alabama. He’s well-known in Sunnyland and can be seen on his way to work or the bank. His previous straight job– before he was with Service Alternatives– was filling soap bottles at Brambleberry Soaps, also in the neighborhood. Joe likes his current position better, saying the soap job was “boring, after all.”

And while he admits the Papa Murphy’s job pays better than panhandling (a term he & Isaac both use freely), he does not look back on it as a negative chapter in his life. In fact, he may actually still keep it as a hobby, though not in Bellingham.

“No one was mean,” Joe said about his days freelancing on the corner. “Maybe a little bit of people might say something, but not rude.”

“It’s been rewarding to watch this transformation in Joe,” added Isaac. “At first he was reluctant to give up panhandling. He knows he has a presence in the community now, though, and that he can’t have both.” 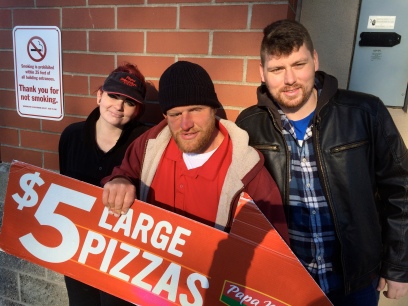 Now that he has steady employment, Joe is considering his next move. He likes to goof around on the internet at home and play video games, Super Nintendo being his favorite.

“The new games are too modern,” he said, contemplating his multiple computer monitors, not all of which are currently functional.

But it’s the travel bug that seems to have gotten him more than anything. There’s a grandfather in Indiana who he hasn’t seen in “many years” that he’d like to go visit. Ed, the resident director of the apartment complex has been working with Joe to plan a trip. Indiana’s far, though. Idaho is also in the conversation.

On my way out of the apartment, Joe proudly shows me a jacket and knit cap he received as a “tip” from a motorist while working for Papa’s. He says people still occasionally give him cash, but he seems to value these pieces– tools for a winter barker— as more precious.

Smoothing the fabric on the jacket, Joe pauses, looking to the side before adding “I guess good things just happen to me.”

One thought on “When Everybody Wins”